Find 2020 Medicare plans in your area

Looking for a Medicare insurance plan?
Get 24/7 easy online help.

Looking for Medicare Plans in Your Area?

Home » Medicare Resources » Obamacare vs. Medicare for People with Disabilities

Looking for Medicare Plans in Your Area?

Obamacare vs. Medicare for People with Disabilities

Summary: If you have end-stage renal disease (ESRD, which is kidney failure), you may be able to get an Obamacare plan instead of Medicare.

You might be eligible for Medicare in some cases if you have a disability. But just because you can get Medicare coverage, does that mean you have to take it instead of a major medical health plan under Obamacare? That’s what this article is all about.

Some people qualify for Medicare before they turn 65, because they receive disability benefits through Social Security or the Railroad Retirement Board.

Obamacare refers to the Affordable Care Act (ACA) passed in 2010. Under Obamacare, if you have a disability – or any pre-existing health condition – health plans sold in the federal Marketplace or state exchanges can’t turn you down when you apply.  Every health plan that complies with the ACA, including those sold on the Marketplace under Obamacare, must include certain benefits, such as prescription drugs, preventive care, mental health services, outpatient care, and hospital care.

Medicare Part A generally covers prescription drugs given to you as part of your hospital inpatient treatment. Medicare Part B may cover certain medications administered to you in an outpatient setting.

Obamacare instead of Medicare is OK if you have ESRD

ESRD stands for end-stage renal disease: permanent kidney failure requiring regular dialysis or a kidney transplant. The disease might make you eligible for Medicare at any age. If you’re newly eligible for Medicare because you have ESRD, you don’t have to enroll in Medicare. You’re free to sign up for an Obamacare plan.

Note that you’re not automatically enrolled in Medicare if you have ESRD.

If you have Medicare coverage and have ESRD, you might be able to withdraw your Medicare application. You might then have to reimburse the government for past disability and Medicare benefits.

Obamacare vs. Medicare: comparing costs (disability or not)

There are many variables when it comes to your out-of-pocket costs, whether you’re covered by Medicare or under Obamacare. Disability generally doesn’t affect these costs.

Overall, Medicare costs you less than Obamacare when it comes to average premiums and deductibles. 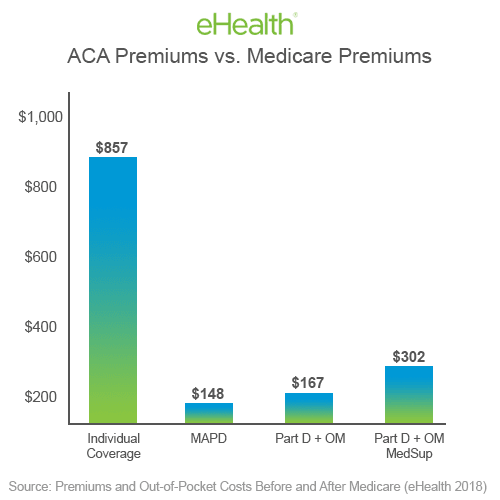 For example, take a look at the third column from the right in the graph above. The average total monthly premiums for someone who’s enrolled in Original Medicare (Part A and Part B) and a stand-alone Medicare Part D prescription drug plan was $167. The average premium for someone close to Medicare age (63-64) under an ACA plan was $857. (ACA plans include prescription drug coverage.)

Next, let’s look at a different Obamacare vs. Medicare cost comparison: average deductibles.[1] 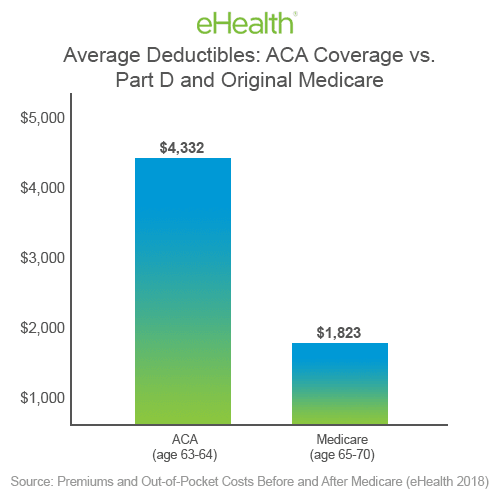 Medicare average deductibles and premiums stack up lower than those of Obamacare.

Under Original Medicare, most people don’t pay a premium for Part A. If you’ve worked at least 40 quarters (10 years) while paying Medicare taxes, in most cases you don’t pay a Part A premium. However, most people pay a Part B premium. The amount can vary depending on your situation, but the standard Part B premium is $144.60 in 2020 (the graph above shows data from 2018). There are also deductible amounts and coinsurance or copayment amounts you may have to pay. The Part A deductible is $1,408 in 2020 (per benefit period). The Part B deductible is $198 in 2020 (per year). Read more about Medicare out-of-pocket costs.

Marketplace plans under Obamacare usually also have premiums, deductibles, copayments, and coinsurance amounts. They typically also have out-of-pocket maximum amounts. This means that after you’ve spent a certain amount on certain health-care costs, the plan generally doesn’t charge you for covered health-care services for the rest of the year. In contrast, Medicare Part A and Part B don’t have out-of-pocket maximum amounts.

Can I choose Obamacare instead of Medicare if I’m disabled?

Whether you can enroll in an Obamacare plan (or another major medical plan) instead of Medicare may depend on whether you qualify for premium-free Medicare Part A.

If you have insurance coverage through an employer’s group health plan, and you qualify for Medicare, in some cases you can be enrolled in Medicare and the group health plan at the same time. If the employer has at least 100 employees, Medicare would generally be the “secondary payer” in the coordination of benefits. This means that the employer plan would pay its share first, before the claim is sent to Medicare.

If your employer has fewer than 100 employees, Medicare is the primary payer.

If you pay a premium for Medicare Part A (because you have worked for less than 10 years or 40 quarters while paying Medicare taxes), you may be able to enroll in an Obamacare plan instead of Medicare. However, be aware that if you decide to enroll in Medicare later, you might have to pay a late-enrollment fee.

If you have questions about Medicare coverage related to your disability, I am happy to help. To get started, simply click the Get Quotes button to schedule a phone call or to request a personalized email.

Browse our other Medicare articles:

To understand more about Medicare, read these next:

Compare affordable Medicare plans available in your area
Get started and find a Medicare insurance plan for you today.